Climbing around in some other family trees 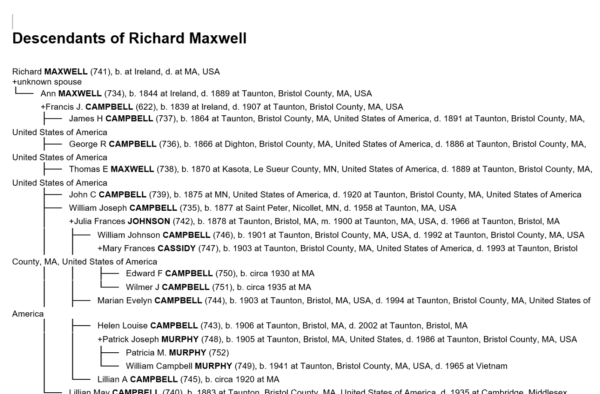 I have spent quite a bit of time recently trying to add detail to the lineage of my wife, Chris Ann Maxwell. It’s a challenge because, contrary to what she’d always been told, her family is absolutely huge.

Where my family comes from the same part of the world (the Galicia area that was once part of the Austro-Hungarian Empire and is now part of Ukraine) and lived for quite some time in the same place (Brooklyn, New York), Chris’s family is much more varied.

Some are from the Alsace-Lorraine area of France and came to Louisiana starting in the 1850s. Some are from (probably) Spain and Portugal and came to the United States by way of the Caribbean islands and Charleston, South Carolina. Many came from Ireland in the 1840s and 1850s to a town west of Boston called Taunton, Massachusetts.

It has required that I update six of the family trees I’d posted three years ago, and add a new one. The Irish side of Chris’s family comes through her father, Charles Francis “Frank” Maxwell. There’s a tree for the Maxwell line. There’s a lesser tree of his maternal line, the Ray family, which reflects how much less we know about that line so far.

Chris’s mother, Maxine (Shlivek) Shaw, who went by the stage name Maxine Stuart, descended from an Eastern European Jewish family on her father’s side, detailed in the Shlivek tree. On the ancestry of Maxine’s mother, Helen (Simon) Shlivek, the trees begin to grow very large and varied. The most direct is the Simon tree. The Goudchaux-Godchaux tree, the Marquez-Marks tree, and the Labatt family tree add further details.