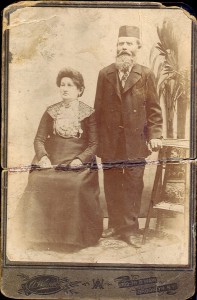 Surah Henya (Strober) and Chaim Shulem Schkolnik, my great-grandparents on my father’s father’s side.

This photo was probably taken in 1905 or 1906, in Buczacz, Galicia, the largest town in the area of Jazlowiec, Galicia where my great-grandparents lived.

Chaim Shulem was a brewer and farmer who had a “royal license” — similar in our society to a commercial franchise — to provide beer in the area.  The anecdotal information is that his agricultural and business skills were self-taught.  He was known as an innovator who often crafted his own solutions to mechanical problems.  He grew to be very prosperous.

Chaim Shulem died of a lung disorder — possibly tuberculosis, but more likely lung cancer, since he was known as a heavy smoker — after treatment in Vienna, then the center of education and science.

Surah Henya immigrated to the U.S. some years after Chaim Shulem’s death with her oldest son Folic and his son Leon.

She died in 1928 and is buried beside one of her brothers in the Baron Hirsch cemetery in Staten Island, NY.