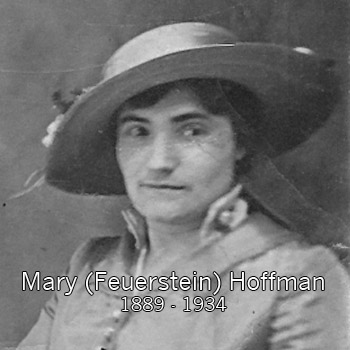 She, too, was from Galicia, from a shtetl called Brzezany.

She arrived in the United States by herself on July 6, 1906 aboard the SS Kaiser Wilhelm II sailing from Bremen, Germany.  The ship manifest lists her as 17 and a tailor.

She worked for a time in the garment industry and then as a nanny, possibly for the owner of the garment shop, before marrying Frank Hoffman.

They had four children — three sons and a daughter.  My mother is the daughter.

She died in 1934 of a stroke, probably caused by untreated hypertension.