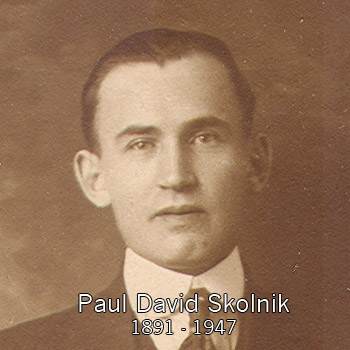 He was born in 1891 in Galicia, then part of the Austro-Hungarian Empire and now a region in the western part of Ukraine.

He was the second of three children born to Chaim Shulem and Surah Henya (Strober) Schkolnik.

He first immigrated to the United States in 1907, according to records at Ellis Island.  He then returned to his shtetl in Galicia, Jazlowiec (now known as Pomortsy), served as an officer in the Austro-Hungarian army, was discharged, and returned to Brooklyn, probably sometime around 1912.

He married Esther Tepper on January 2, 1916 in Brooklyn, NY.  They had three sons.  My father, Saul, was the middle child.

Paul worked in New York as a shop owner and waiter.