I’ve been wrestling all weekend to make sense of James Kang’s death. James died Friday. He left work complaining of a headache and was found in his car in the KCBS/KCAL parking structure several hours later, maybe as late as 5:30 that afternoon. 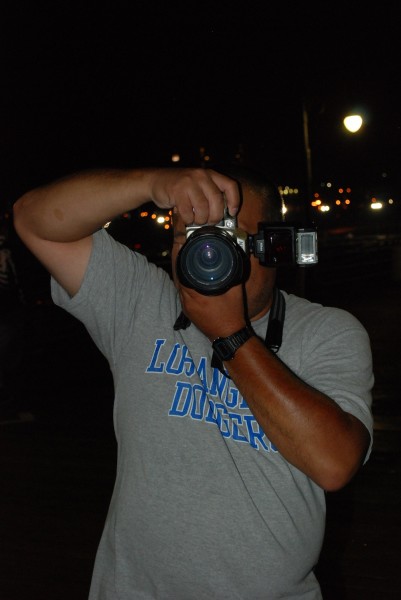 James Kang at a Justice League of Photographers (JLOP) get together on the Santa Monica Pier just after midnight on July 31, 2009.

I learned of this from a Facebook post Friday evening, and have spent every waking hour of the last 48 trying to understand what might have happened and what, if anything, I might have done to change the horrible outcome. We still don’t know how or why James died—that won’t come until the autopsy is completed and the results released—but the hours have given me some insight into why James was special to so many of us.

Others have written moving accounts of James’ life. The one on the KCBS/KCAL website is a touching tribute. Bryan Frank has also posted a powerful remembrance with some great photos on his beFrank blog. Former CBS2 morning anchor Suzanne Rico has written movingly about James on her blog, explaining the James Kang “like button” legacy and how he would encourage everyone (including my wife, my daughter, and my stepdaughter) by letting them know they’d posted well. An incredibly diverse group of people, some of whom knew James only from his forays into Facebook and Twitter, posted about how he touched their lives.

These were among James Kang’s many dimensions. James was a remarkably stalwart guy, and each of us was lucky enough to bask in that from a slightly different vantage point. I suspect my difficulty getting my feelings straight enough to set down in words is because I knew James from many vantage points—as a co-worker, a frequent dinner companion, a fellow photographer, and a friend.

James and I, along with a handful of co-workers, were assigned some new tasks in 2009. It was especially odious, time-consuming work that came to take up several hours a day, menial chores that had to get done but for which there would be no reward, no extra pay, and probably not even any notice from our bosses. And this new task was in addition to, rather than instead of, all of the other stuff we were supposed to be doing.

There were two ways to go about it. One was to complain and drag our feet, which is a common path in a newsroom and the one I was initially inclined to take. The other, I learned from James’ example, was to do the best we could at it and measure our progress by goals we set for ourselves and tried to achieve ahead of schedule. I started off setting what I thought were reasonable benchmarks. James and the other members of our team shattered those within a week. Together, we established new goals, and a week later, James and the others had left them in the dust. So we kept setting higher and higher goals, and James led all of us to achieving them faster and by wider margins than any of us thought possible. The odious chores never got any less odious, but we sure did have some fun challenging ourselves and our abilities to do them faster, better, and more efficiently.

Those of us involved also developed an intense sense of camaraderie. We may have felt put upon by the assignment, but we turned ourselves into a team, a half-dozen people who had to work together and help each other out if we were going to get it done at all, and who had to improvise if we were going to continue beating our benchmarks. All of us took great pride in that. We gave ourselves rewards—dinner at a deli around the corner from the station every couple of months—and celebrated our successes within our small circle. True to his eclectic tastes, James was a big fan of Art’s corned beef. 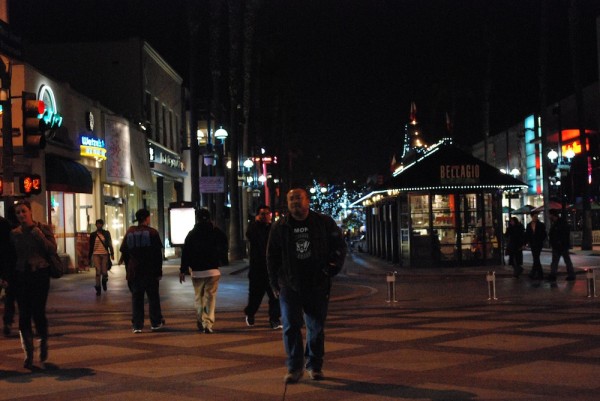 James arriving at the Third Street Promenade the last time we shot photos together, on March 4, 2011.

James was also a pioneer of social media. Years before the journalism blogs were crowing about the importance of Facebook and Twitter in building and maintaining a tv news audience, @kanger33 had established his beachhead online. He explored photography, food trucks, and many other subjects through his Facebook friends and Twitter follows. He also became a social-media beacon for many newsies taking their first stab at new platforms. He often engaged KCBS anchor Pat Harvey on Twitter, helping to draw out and add an online dimension to one of the great personalities in TV news today. As Suraya Fadel, a KCBS/KCAL reporter, found her social-media voice and became one of the great Los Angeles reporters to use Twitter, James gave her the nickname #TwitterPrincess, which is now widespread. Nobody in the newsroom instructed James to use his advanced knowledge of social media to ease the way for others onto the emerging platform. As a matter of fact, I’m pretty sure nobody in station management even knew James had developed that expertise.

James adhered to a Twitter tradition of saluting online friends on what’s known as #FF, for “Follow Friday,” and he was infallible at it. Even if I hadn’t tweeted in weeks, each Friday I’d get notified of a Twitter mention, James Kang including me on his #FF list. I awoke Friday morning to that mention.

Next Friday, it won’t be there. That will continue the great void I now feel for a great guy who was my co-worker, my teammate, but most of all, my friend.

Previous post: What You See When You Get Up with the Sun