Sometimes documents create questions rather than answer them. That’s the case with this set of papers from 1943-44. They concern the naturalization of my great-aunt, Tante Clara (Skolnick) Rosenblum.

Here’s what’s so curious: her application for U.S. citizenship came 29 years after she arrived in New York aboard the SS George Washington.

Clara was the youngest child of Chaim Shulem Schkolnik and Surah Henya (Strober) Schkolnik. That makes her my grandfather’s younger sister. But the connectedness gets a little more complicated. Through her marriage to Jacob Rosenblum, she was a  sister-in-law to Bobscha (Tepper) Rosenblum. She became close friends with one of Bobscha’s younger sisters, Esther Tepper—such close friends, in fact, that she introduced Esther to Clara’s brother Paul. Esther and Paul married. That made Clara and Esther sisters-in-law through my grandfather Paul and sisters-in-law through Esther’s sister Bobscha. And besides that double connection, Clara and Esther remained best friends for the rest of their lives.

Because of their closeness, it’s not at all surprising that Clara and Esther would be witnesses at each other’s naturalization. Who better to vouch for you than your best friend/sister-in-law?

My best guess about why it took almost three decades after Clara arrived at Ellis Island to become a citizen is that there really wasn’t a reason to… until her husband died in 1943. And while the application of Social Security laws in the mid-40s is a complete mystery to me, I’m guessing that the naturalization was necessary for Clara to collect her husband Jacob’s benefits after his death.

It’s the only thing that makes any sense.

Jacob Rosenblum, Clara’s husband, died in August 1943. It’s the only event I can think of that could have prompted the rush toward naturalization. A month later, Clara obtained documentation that she had arrived in the United States on April 14, 1913 aboard the SS George Washington sailing from Bremen, Germany. 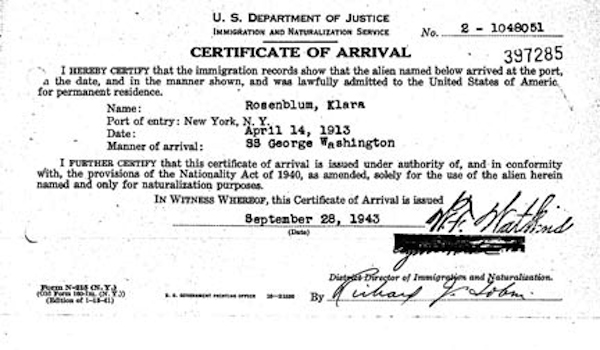 The Certificate of Arrival, issued under the European spelling of her name, would have been a necessary document for naturalization. It showed that she had been in the country as a permanent resident for the requisite time to be naturalized.

But if collecting her late husband’s benefits was the goal, why wait a month? I suspect Clara didn’t. I think the gap was the result of how long things took in those days, especially in the middle of World War II. Getting the Certificate of Arrival would have taken time for the request to be transmitted to immigration authorities, for a search of the ship’s manifest and the immigration documents, which had to have taken time to retrieve, and for the the certificate itself to be prepared, signed and delivered to her. 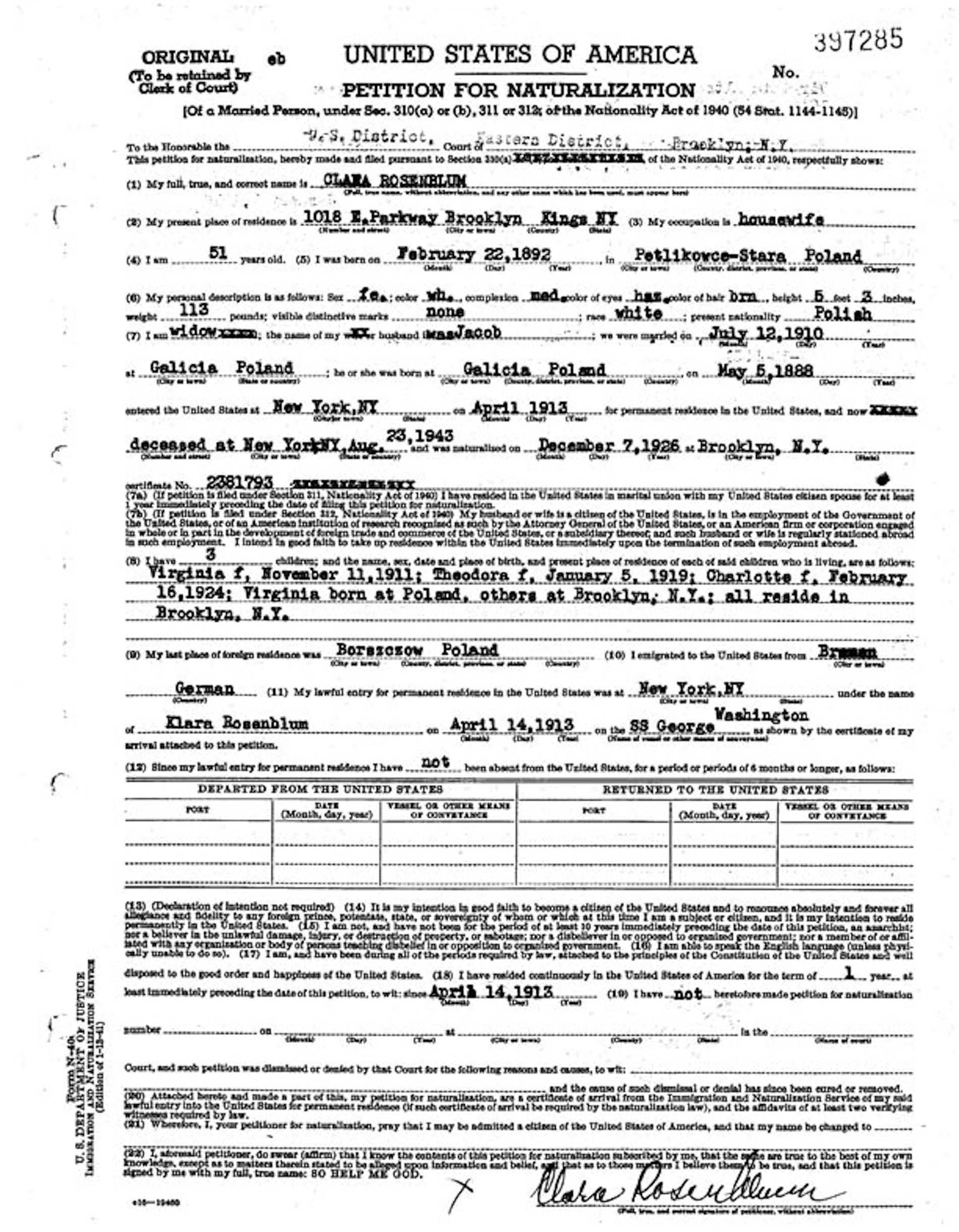 The Petition for Naturalization is not dated, but my guess is that it came hard on the heels of the Certificate of Arrival being issued. And with the Petition is the Affidavit of Witnesses. 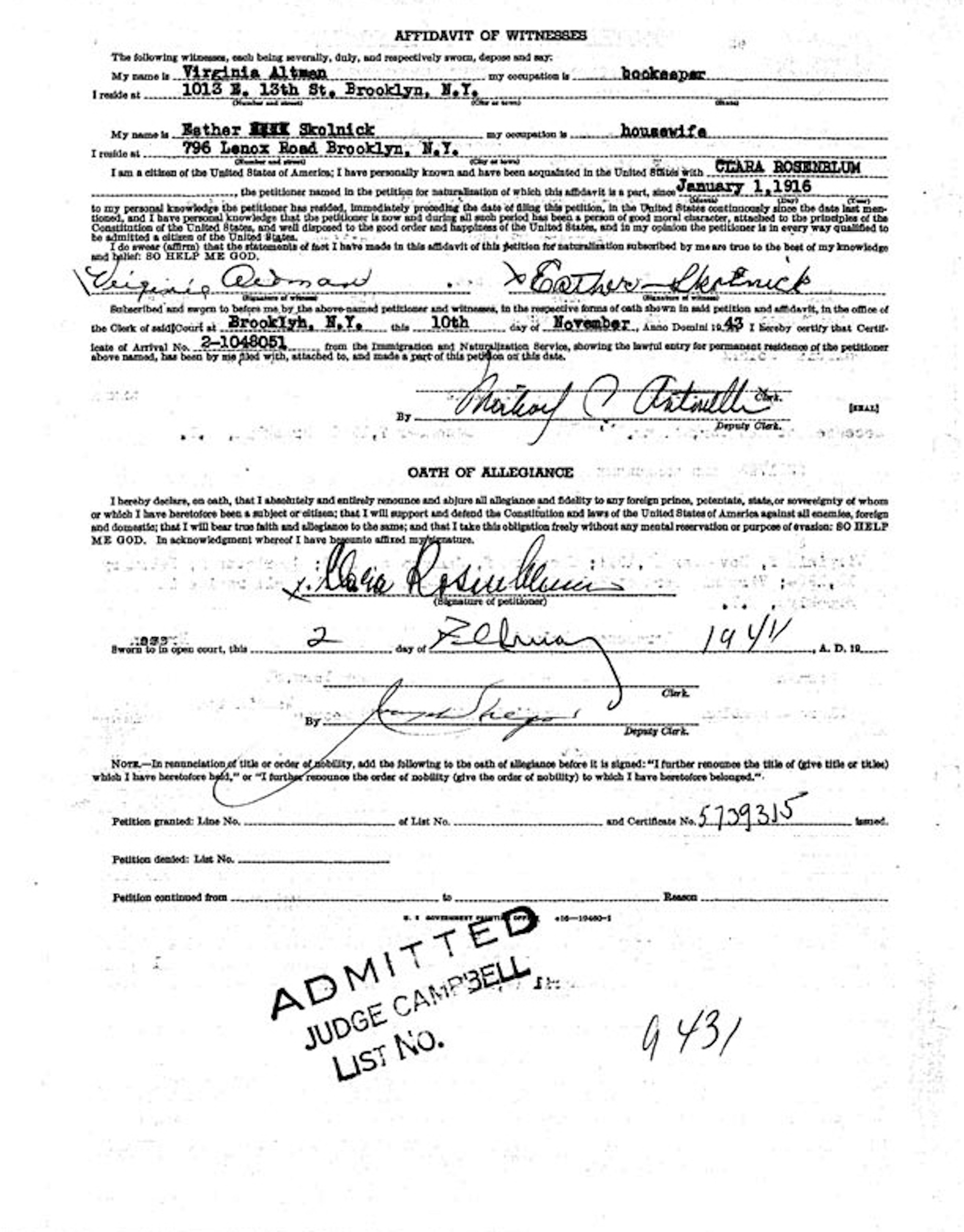 The Affidavit of Witnesses is dated November 10, 1943. Virginia Altman, the first witness, was Clara’s oldest daughter. Esther Skolnick, the second witness, is my grandmother and Clara’s best friend/sister-in-law. 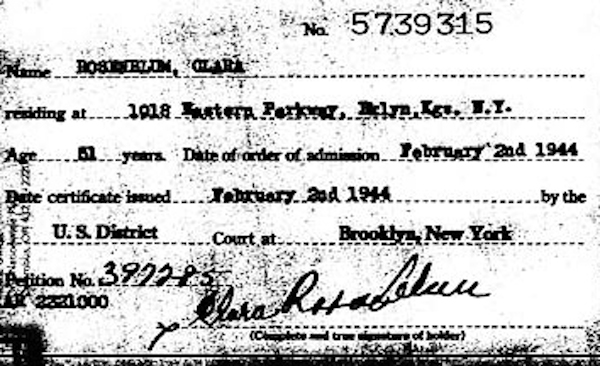 Even with the great push to get it done, it took three more months before the Naturalization was finalized. That happened on February 2, 1944.

All of these documents were retrieved a few years ago by researcher extraordinaire and cousin Kristie Weiland Cohen, when she went digging through uncatalogued paperwork in a storeroom archive in a government basement in Manhattan. It’s four pretty simple pieces of paper that no one in the family had ever seen before. But those four pieces of paper tell a remarkable story of a new widow trying to work her way through the bureaucracy to find a way to support her family.