Where does this piece of the puzzle fit? 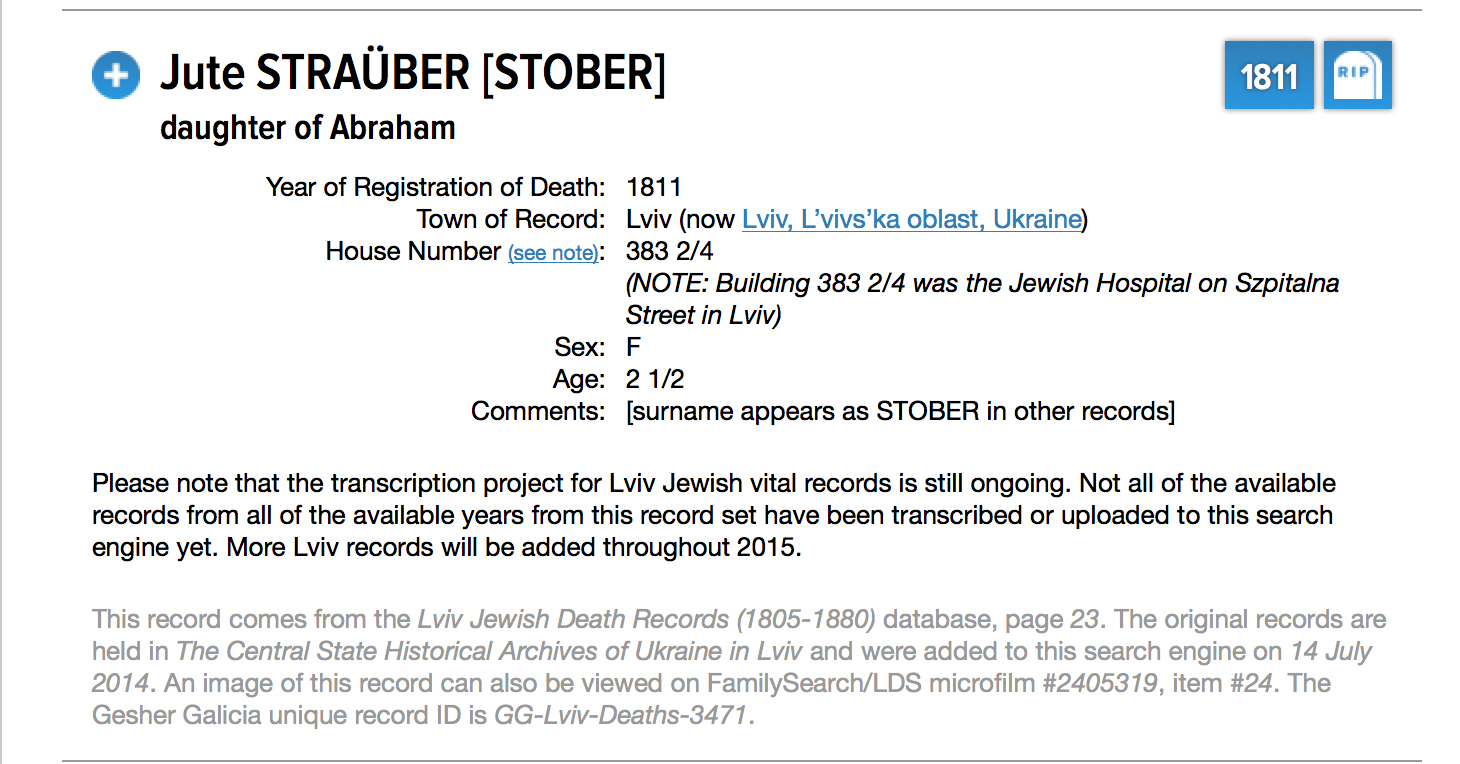 I stumbled on this little item today in an online database of Jewish vital statistics and government documents from the Galicia area of Austria-Hungary. It may be an enormous breakthrough in our genealogical research… or it may be nothing at all. (Interesting range of possibilities, don’t you think?)

So here’s why it might be significant. Abraham Strober, best known to his descendants like me as Abraham Aaron Strober, is what we call the “common progenitor.” He is the guy all the rest of the 1,400 or so names on the family tree stem from. Maybe that’s just a tad overly broad. There are several branches of the family that may descend from Abraham Aaron’s brothers, or possibly cousins. But however you dice it, Abraham Aaron is the guy at the top of our chart. He’s the oldest known ancestor.

We think, based upon information that amounts to less-than-scant evidence, that Abraham Aaron was born between 1797 and 1808. We know he had at least one son, Yoinus Folic, who is my great-great-grandfather. We think he may have had other sons. But we had never heard before this mention that he had a daughter.

The strongest part of this item is that it mentions someone by the name of Abraham Strober (or, in an alternate spelling still in use by a broad segment of his descendants, Strauber).

The weakest parts of this item are many:

It says Jute died in a hospital in Lviv, which was the biggest city in that part of the world (sometimes known by its name in German, Lemberg). Abraham Aaron lived in a tiny shtetl called Jazlowiec about thirty miles to the southeast. That doesn’t seem far to us today, but it would have been a long ride on horseback or by wagon. It says she was two and a half years old. Had he taken her to Lviv for medical treatment that he couldn’t get elsewhere? Did he live during that time in Lviv? There’s no way to know. And if this is our Abraham Strober, how far off are the ages? It’s doubtful (if we assume he was born in 1797) that he had a two-and-a-half-year-old daughter when he was 14 years old. So which date is in error? And what does it do to the rest of our family tree to make his birthdate earlier.

Clearly, from the information here, we can’t know the answers to any of these questions. But perhaps this document can lead us in the direction of other documents that will help us piece this puzzle together.

Next post: How did this place escape me until now?